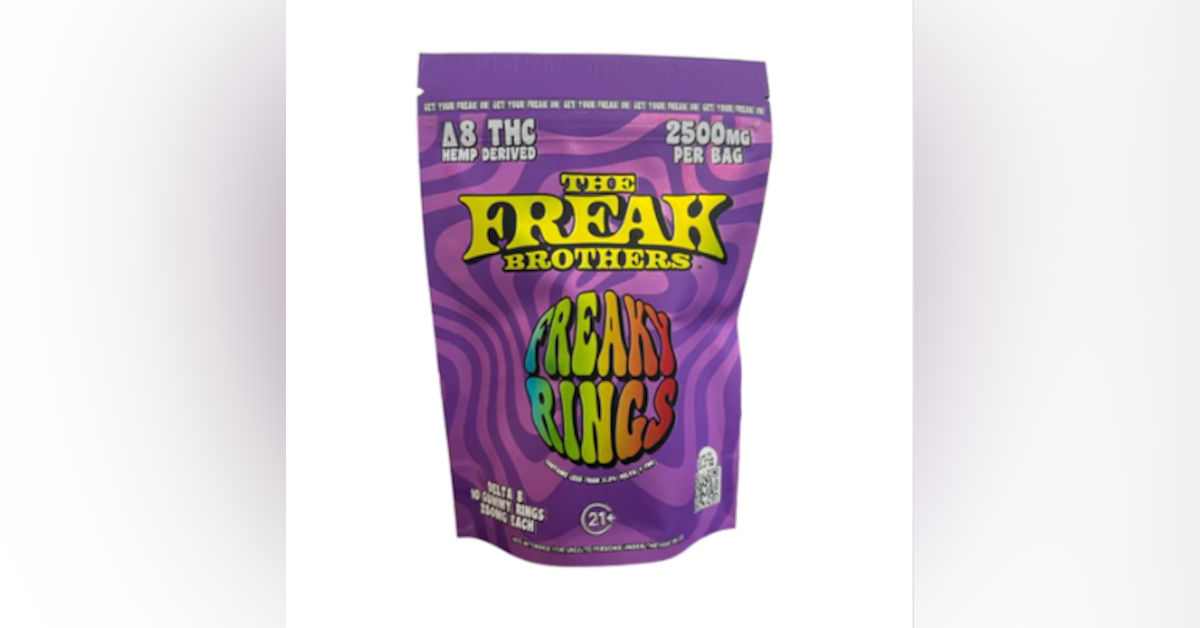 The Official Seenager, Never Too Late.

Instead of getting his normal CBD. Charlie grabbed some CBD at his corner gas station. He opened the bag, ate a gummy, talk about dumb moves

About 20 minutes later, while working on his laptop, the entire room began to spin and here come the hallucinations!

A real teenager, seenager move, for sure. "The Freak Brothers, Freaky Rings, should have given it away. Instead, it went unnoticed. Charlie sure liked the color of the bag, though.

Listen to this episode on The Official Seenagers for all the hysterical details of Charlie tripping his brains out, all by mistake!

The Acid Trip Was A Mistake! OMG!

Hey everyone, welcome to the official teenagers what's going on Charlie?

ponger. How are you Debbie

and I grow. So you know how I take CBD. Right? And Ohio the company that I go to is right down the street from here. Not really it kind of kind of well it's two, two miles, okay. Okay. There's a gas station down at the corner which is like eight tenths of a mile from Mike from this cottage. Okay. So I decide, I go in there, and I decide, well, you know, my neck is still killing me from and the CBD really helps injured reserve. I'm on the IR right. So I that's why I'm still standing up. So I go into the gas station. And I see this CBD thing or whatever the hell it is. And in this

gas station to the

gas station, because I've stopped there leaving here and I turned around I was blown away I go wow, they've got a lot of stuff here that CBD THC wacky stuff.

Okay. Well, I said to the guy, this is how dumb I am. I said to the Chi Well, which ones you know the good one for the CBD. And it goes here this back. So it's a gummy thing. So I go Alright,

well, you said which one is the good one with not not for pain? Not good. I was

really because I was in pain. I wasn't thinking properly. So there's this really cool bag. I didn't read what the thing said on it. It just looked like a Grateful Dead kind of graphic. So I opened the thing up, and I eat it. Just like that. Just like that in the car on the way home. Now I'm home and I'm typing on the computer, I'm editing some blogs and all that sort of stuff. And all of a sudden dead My head started going and I'm like, am I having a fucking stroke or what's going on here. So now I stand up and I almost fall over the whole room here is spinning, right? I'm getting sweaty, just thinking of the whole room is spinning, and my hand goes out like to get my balance. And I see 15 Hands follow a trail trails like like, trip and my brains out less detail. It was sick. And so now I'm like, Oh, my Oh, by yourself by myself. Okay. And so now like I kind of

straighten up this look at the bag and see what it was.

But it wasn't just CBD was I don't know how to meet THC. Who the hell knows. I

mean, it was called freaky francs or some shit like

this you way way, way, way way you bought free I didn't even read ranks.

I whatever job I CBT Yeah, and I didn't even read it. That's the thing. I just Oh, I just rip because my now I just ripped it open and was like this circular gummy thing. And I put the whole thing in and

you're at it. You lost your way.

Oh my God. And so now having a heart attack by yourself. So now well listen to this. So now I'm like, ooh, I wonder if so I'm looking at my Apple Watch and in my heartbeat. And I'm like, every two seconds I'm looking at it keeps saying normal. Why am I so whacked? So, uh, maybe I need to take a shower. So I go to the outdoor shower to turn it on. And I'm stare and they finally go. I gotta get in there. So now I get in the shower like this isn't working. So I get out of the shower. And I'm like, maybe if I get to the public pool, I'll swim this off. I couldn't get off the property. I couldn't get to the car. Like, the whole property is spinning around. So now I come inside. I go alright, I'll go up to the rowing machine. And I'll row I wrote for five minutes. I'm like, I can't do that. So then I'm walking breaks. See right here, back and forth, back and forth. Back and forth going, mother. I have a meeting at five o'clock. This is ridiculous. I'm going to play golf tomorrow and big golf tournament. What am I going to do? This is horrible. So now I'm like ready to have to go to the bathroom? Just to go number one or number two. I go and sit down on the potty. I'm like, What am I doing here? Come on, like no, I get up and then I'm like, Alright, maybe if I lie down. This is two o'clock in the afternoon. I lie down close my eyes and I start to hallucinate. It's getting better by the hour. I couldn't call anyone because I couldn't do that. I couldn't talk.

This is just the worst. It was

the worst feeling in the world.

How long did you stay high? Well, I

lines. What a mistake. So now I have this golf tournament.

I think it's at 130. So I mean, I thought it was at 1230 It's actually 130 So I get there 10/31 I get up and I go back to the rowing machine I wrote for a half hour I'm still looped in I'm like, Alright, what do I do now I take a shower. I go to the golf course I'm at the golf course at 1030. This beautiful private club, Frankie peppers belongs to it again with the friend. So so. So I get there and I'm like, I'm going to sweat this friggin thing out of me no matter what. So I go and practice the sun's beating down on me. I don't wear a hat intentionally, because I want to sweat like there's no tomorrow and I sweat to the point. And I hadn't eaten since two o'clock in the afternoon is a horrible story. I'm so hungry. That I wolfed down a hotdog and a hamburger stuff that I really don't need that much. Right. And now, it hits me I'm tired. Oh, no. So there's a gazebo up, like in between the 10th hole and then so I go up there and no one's up there. And I pass out.

I pass out. So now my wake up and I'm like, Well, what time is it? You know? So I found out it wasn't till 130 So I go to the golf cart and I'm sitting there and all of a sudden I hear Charlie. Charlie anybody seeing Charlie? Charlie boy where are you? It's Frankie peppers. Charlie boy. Are you all right? Look like this it goes I go Frank. I got a cheesecloth around my brain right? Because what the hell did you do? I told him the story goes good thing you didn't call me I go call you I couldn't even go near the phone are you kidding me? Took me nine holes before I got my brain together

oh wow this all happened while I was in the Adderall. You are having

a you are fawning and I was your whacked out

running whack okay let me let me get this straight You go down the street to a gas station Yeah, that usually he would just go for gas or something you turn around there's a wall for love crazy crap I know and you select if I'm not gonna check ahead yeah, yeah nice look at this packaging. Oh my god okay grown man picks the freak brothers yeah freaky ring didn't even Delta eight freaky ring didn't comprehend. Okay, so now I want you to support this suggestion of how this experience is gonna go oh, it says our customers are assured to be gassed up and ready to live upon the arrival of their new product you didn't wait for that you just went and picked it up Yeah. And they actually called the DEA gas team thoroughly researched tests and rigorously quality controls all the brands listed on da gas if you can go on online and get this every product listed for sale is it you know your lab reports Yeah, providing research information supported claims. I would suggest you not leave a review

I can provide my research holy cow.

They want to know do you want to be notified when this product is back in stock? Oh,

no. Oh. I did. That was the biggest screw up I think that I've had in a long time didn't read it. Didn't look at it. I saw the coloring it looked like the Grateful Dead thing. And the guy was like yeah, this is a really good one and I just took it the future

It's the stupidest thing on the planet. I'm I read

the instructions on the Claritin 14 times. And you shoved a freak brothers freaky ring.

Okay, good for you. Yeah, like I said, Well, I'm not sure where it's gonna go from here. I

are you got this.

Oh my god. This is just a nightmare. All right.

Anyway, what is what is the word to the audience where to the wise don't eat things you don't read the instructions on? Yeah, that looks okay, thanks for listening to the official guide everybody. We love having a few laughs hope you enjoyed a couple with us today. Thanks

so much and it's never too late. It's well it's kind of too late now because I did something I shouldn't have done. Deb

See you later. Bye okay one Joe speed ahead. No, that notion, just call smile.