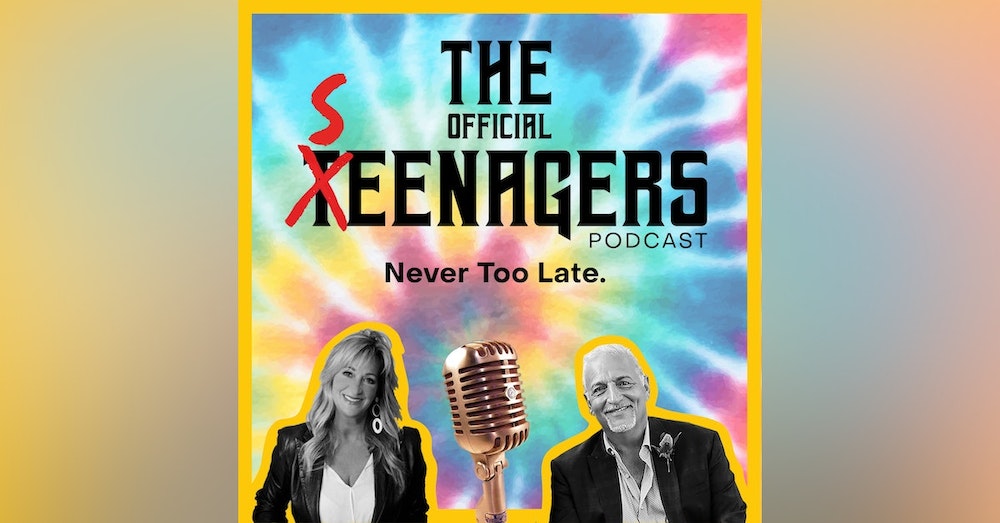 The Official Seenagers, can't make this up. Another funny episode about Scooters, Golf Carts, & I'll Call You Right Back?!

Another must listen, just can't give this one away!

A tiny favor, in order for us to get rated on the podcast charts, and this is huge for us, we just learned if you scroll down on your podcast player, Apple, Spotify or whatever podcast player you use. Find Rate and Review, write something, it takes two seconds. You have no idea how much this helps us! Thanks so much. ;)

Blogs This blog and more... and some that you wrote too!

A big shout out to Cos Cob! Yeah Dats Right!

Scooters,Golf Carts, & Call You Right Back?!

And I'm Debbie Nigro we're having a lot of fun laughing about not falling apart. you gotta laugh This is not going I know right? Yeah, we're representing a very big group of fellow is ageless people. How's that? Yeah.

I don't know if I like the label though. We're you know, some people are calling us activators active agers. Right. I race it. Yeah, good.

I say I'm Angeless I just say and weightless on me. That's it now I'm ageless timeless and weightless. I just happen to be an age is just a number. Yeah. Ageless, timeless and weightless you in you a part of us. So listen, Charlie. Yeah. Just to let everybody know what we're doing now because this is improv and comedy and we see each other when we see each other right here and we do this podcast and we love each other and during the week or when we're apart we have things that happen in you go oh my god it's something perfect for this year tell each other right we don't tell each other and we walked in and we write it down on little index cards and throw it in the middle of the table and I pick out or he picks out that's where the topics are you picked him out he has no idea where this goes go. What is it? Okay electric scooters on the street? Oh, feel free take judgment for me.

What do you mean electric scooters on the street? I even know what those What are you talking about? Around

oh, you see, yeah, you get into what they should have. They have Yeah. You know, a scooter from when you're a little kid. Yeah. With a motor? Yeah. Where are we going? Oh, are where but over where? Like in big cities. So I first saw it down south. We were traveling around and Dave and I were come back from Japan. I go, What am I looking at? Yeah, electric scooters. Everywhere I go my electric scooters. It was Virginia Beach, electric scooters. And they're on various corners. That sounds like fun how fast they go. I'm never gonna know. Trust me. I'm not getting that is my point of bringing them up. Oh, there Yeah, for anybody to take. Dave will do it. No, he's not covered either. So listen, we they're there. Yeah, anybody could take them and then they go home to your house. And then I go well, how do these people get these back? A truck goes around, picks them all up and brings them back to the location so you can take them again. That's cool. Right? So it's a good idea. If you are 12 Yeah, or 15 Yeah, maybe 22 And I don't even know the age that you're allowed to ride these things. Yeah, I'm sitting in my car the other day and I'm coming out of the parking lot and I go and there's a whole batch of them I'm never never give me I can't you want to get me to try one of these Park me a three wheeler with a basket.

that be? They also have bicycles. They lead their electric bicycles. They just I want to try one of those. That's cool. Yeah, but these one these scooters every time I look at I go, Oh, that's an accident waiting to happen then. You never saw a young kid go by you on one of those electric scooters.

Well, you know mopeds Yeah, all the time. I would love to have a moped okay scooter isn't a moped a scooter.

motorcycle. We should have a whiteboard.

myself. I think they should have a golf golf cart lane on the highway. No, I that would be my idea. Have a good time.

I have a friend who loves being very risky on a golf cart while we're playing golf me only what's risky me. Like if there's a downhill he will floor it. It won't hit the brake and let it glide, put it neutral and go as fast as we can. I'm like, we're Seenagers, and there's a cliff. And then he slams on the brakes and he spins around and he laughs I'm like, don't ever effin do that. To me again.

Actually, I think I know is in there looking for him. There's somebody out recently, and yeah, there's people who are crazy. Yeah, you can't risk guys one of them. You can't reason with crazy. No, crazy is crazy. Yeah, totally. And you know, you should know by now. You should smell crazy. Yeah,

we realized at our age we should know Right? Well, you know,

you know you're you know, you're made a bad decision at this age. Yeah, the problem is you can't get out of it. Yeah, you can't move fast enough to get out of the way.

What do you have in there?

On my way call you a little bit is the second card. What is it on my wall

calling you? That's you. I wrote that down? Because this is Debbie. You guys. Hey, Charlie should call me on the phone. I'm leaving. I'm going here. I'm going to my house. And then I'll be right over. I'll be awesome. leaving at 1030 Really? 1030 All right, let me let me clean up the house for Deb Baba Baba. I don't hear from her.

I'll stop you making me feel bad. She, she shows up to Alright, well, I read you along the way.

that call you right back could be anything.

Tomorrow a week from now. It's like so finally I said to a Frankie the model because used to be a model. I go Frankie, let me ask you a question. When you say a call you a little bit, like at the end of the conversation? I gotta go clean a little bit. Does that mean you're calling me in a little bit? Does it mean you're calling me 10 minutes or you might call me a month from now? Because it could be in a month from now. That's our logo or lingo?

I think we're at a place in time where people who don't get back to you in a reasonable period of time. Yeah, they start to stick in your head like the big pictures and write in your forehead you like not really liked them. Oh,

little bit. A lot of people don't take showers. And then I'll waiting for a

callback. Yeah. And then I'm like, Oh, now I finally know. I call you in a little bit. I'll get back to you. So give me a minute.

I know. And then you forget. No,

You get that and then you feel guilty. And then you bring me homemade code. Yeah. How about when you do this? I know what you're doing. Deb. Right. You you. You were like Oh, I am so late today. Let me bring him some noise. Just

stop and make a little monitor.

Yeah. Let me bring him home. Yeah. Let me let me bring some awesome buco over for him and then he won't be pissed off at all, which I'm not anyway. Okay. I know. Yeah. But I know you now. I know when you say

don't start with me on the half hour you please. Half hour has been going on? I have no, you got

want to tell you something? Well, I once looked up the late problem. Yeah. It's not just a now thing. Yeah, it's my whole life. People will hear you say this a little bit like, oh, yeah, no, got Debbie storage. Like people believe them for the show and couldn't always live in a building. They call me they go up downstairs like oh, yeah, I'm in the elevator. That's you. That was like I was in the shower. Yeah, it's different than the LMA. Right? It's totally different. But I am. I never intend to be late. I just have a million things that come up to do before

because the brain of yours. Just like it's a little

when I tell you about the mental illness. Yeah, I try to describe it or you go through life, you realize something's a real problem. Look, I look up one time, not so long ago when it had a minute and wasn't doing 10,000 Other things about the lightning. Some lady wrote an article she's like, I've been laid off a little describing because it's part of like, ADHD. I'm like, I knew it. I knew it. That paper problem. You have a paper problem. It goes right along with it. What do you mean, let me lay down tell you the whole story. Now. We'll go that direction another time. But I'm the late thing is not something I'm proud of. And I actually been on time, it makes me laugh actually shouldn't make you that it's not meant to be insulting. It's just

I know, it's totally not meant to be insulting. But I know.

We're not talking about this anymore.

I love pushing your buttons a little bit

ridiculous. I refused to take this kind of bring up in this public forum. We're breaking up

I was fine, wasn't it? Hey, everyone, tiny favor. If you go to your podcast player, whether it's Apple, Google Spotify, and you scroll down to where it says ratings and review and fill that out. that'll really help us like you can't even believe it's better than money at this point. And all you have to do is just fill out that fill it out and let us know how we're doing. And that'll help us in the ratings and move us up in the charts. Okay. Have a good one till next time. Thanks. See you later. Bye